I addressed the two sword fighting style on the most recent FightWrite.net edition of The Geek Block. Specifically I spoke of the Estilo Macabebe, a Bahala Na fighting style. The first video tells a bit of history, in the second you will see the actual style. It's beautiful. The sweeping movements are very effective but were originally used to intimidate.


This is a style that was born of a need within a lifestyle which is the way all martial arts and fighting styles begin. (The only excepting being light sabers which has an actual choreography and style you can now learn. For reals. I saw a light saber "master" on Mythbusters.)

Two sword fighting styles are not common, certainly not as common as single blades. I believe that's simply because they didn't have a necessity in many lifestyles. Weaponry is native to an area because it suits the area and, again, the lifestyle of the people. Nunchucks are from rice farming, the yawara from Buddhist symbolism, the sai from farming, tonfa from milling and a bo staff is just a big stick. (See pics) The Macabebe carried two bamboo poles and they learned to use them in self defense, not the other way around. They didn't look for a way to defend themselves and picked up two poles.

Look at the lifestyle of your character and their culture. Are they in a profession that requires the use of both hands? If they learn it as cultural tradition, what in their culture called for that? Every martial art and fighting style has a specific purpose that fits that culture.

Until the next round at FightWrite.net, get blood on your pages!

After last week's post on blades, I thought it would be a good idea to show how some are made. Of the many different sword making videos I watched, these are my favorite.

The first URL is from a Korean website. It shows old word sword making start to finish. It is specifically for the making of this Korean blade but the video is chocked full of great details that you can put in your scene.

The second is from the History Channels Forged in Fire series which, like all History Channel series, rocks. This one has a quick overview of forges through the ages.

The final is History Channel's, History Of Swords : Ancient Killing Weapon. It's awesome and a more exhaustive view of sword making as well as swords themselves.

Before you dive in to the pile of swords, which I super don't suggest, I wanted to wish you all, my fearless readers, a Merry Christmas, Happy Chanukah, and wonderful holiday season however and whatever you celebrate. I can't say enough how grateful I am for you.

As you are out and about, walk with your head up, shoulders back, pay attention to your surroundings. Make eye contact with strangers and heaven help, get off your phone!!!! Know where you are parked. Don't carry so much that you don't have a hand free and if possible, go with a friend. Self defense begins before defense of the self is necessary.


History Channel's Forged in Fire: History of the Forge

May you write fearlessly and never forget that God is a warrior. He has fought for you to the death and to the life. 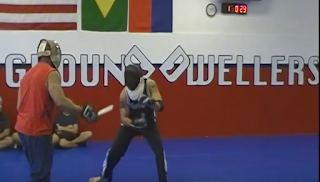 Last week our featured FightWriter, Lisa Godfrees asked a question about knife fighting. I thought this week I should give examples of how an attack would go between educated knife fighters. In every one note the body positioning and the use of both hands. All of these are courtesy of Houston Stick Fighting Association who are some of the kindest people you will ever meet. And, with trained fighters, that's often the case. They are kind, gentle folk ... until the scenario demands otherwise.

Video #1 - Attention FANTASY WRITERS, this video is not only a great example for a scene with short swords, but it shows how the art of judo came to be. If you are a fantasy writer and have a battle scene, you need to know judo. The Japanese art comes directly from the battle field and sword play.

After de-swording an opponent, the dominant fighter would try to throw their opponent in such a way that he landed flat on his back. The weight of armor is especially heavy on the chest so if placed flat one's the back, it takes maneuvering to get back to one's feet. In that amount of time, the downed opponent would be dispatched. That is why throws were created. They used the weight of armor against the fighter to put them in a vulnerable position. In modern judo, the concept is the same: use the opponent's mass against them.

In this video, my professor, Eddie Avelar, is "de-sworded." What follows is judo. You will see that he takes a blow but in armor it wouldn't be lethal. Without armor it would be injurious but not deadly. By the way, stick work translates to blade work as well as hand to hand defense.

Video #3 - Dagger fight. Notice that the knives keep moving and although one fighter, Daniel, keeps his knife as an extension of his forearm in a ready position, when he strikes it moves at angles with his wrist. You will also see him switch grips from forward to reverse. (Remember what that is? If not, see last week's post Featured FightWriter: Lisa Godfrees)


Video #4 - General Grievous. Ok, not really. But each opponent has a stick in each hand.

Video #5 - Tomahawk. This video is especially good because it's slow. You can really break down the body movements.

Remember, serve the story. These videos give you the bones of an accurate scene, but if the skin overwhelms them, you've defeated the purpose. Your scene should never be so technical that a reader must do research to follow them. So, know what's right but, above all, write. Create snapshots of what is most interesting about a real scene.
While knife fighters are gaging one another's distance and there's more dancing than striking, put in visceral details, the surrounding smells, sounds, the feeling of being a god. That is a bit of what's it's like to fight this way. You feel greater than yourself. Everything else disappears except that moment and even that moment seems to stand alone in time. There's no fear, no emotion at all. There's just a mouth-watering fury that makes your eye teeth feel longer.
Don't just let your reader read. Make them a part of the scene. Make them feel the subtle shift in the air as the blade just misses their cheek.

Until the next time at FightWrite.net, get blood on your pages.