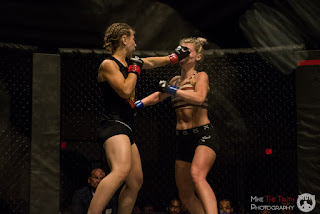 I've been so excited about this post and I want to say first and foremost thank you to my friend Amber Schoech for sharing these with me. It has been an honor to watch her grow as a fighter over the last few years. She's tough, she works hard and she has huge heart! 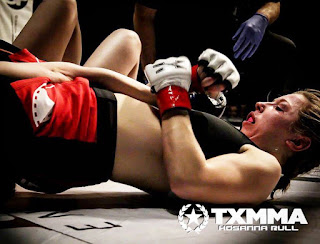 Amber can take a punch. Dear heavens, she has a jaw of steel. And, if you can manage to land one on her, you better. Because if she gets you to the ground, you've lost. 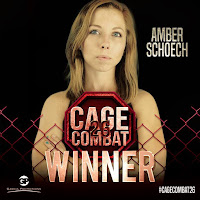 Her last fight was a tough one. She took some damage as all fighters do. If a fighter has never looked beat up after a fight, I'm not sure they are a fighter.


Immediately after a fight, within the time it takes for the announcer to raise a hand and the TV camera to capture a quick interview, is not when a fighter looks their worst. Yes, you will see the swelling start, but it's not until the face is no longer flushed from exertion that the scrapes really show up. The more the adrenaline ebbs, the more the swelling. If you are already swelling in the ring, you are going to really be swollen after. 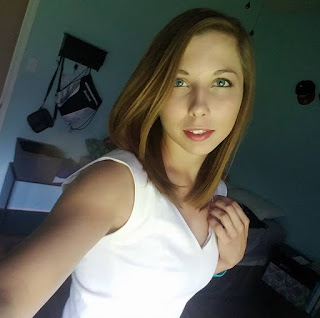 Ok, so here is pretty Amber, and she is pretty. And, I have to say that with her hair braided up on her way into the ring, petroleum jelly on her face and not a stitch of make-up on, she's still pretty darn adorable.


Now, here is maybe ten minutes after the fight, she hadn't even gotten stitches yet. She still had some dried blood on her face. You can see it mixed with the sweat on her neck.I love this picture with all my heart. 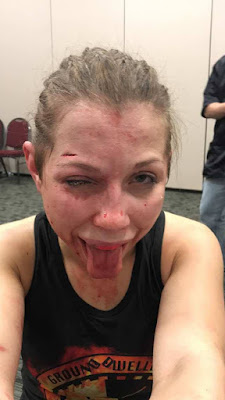 The cut above her eye is from a punch. She first saw the blood on her opponent's face and got excited thinking she had hurt her. But, after feeling something drip, she wiped her forehead and realized the blood she had seen on her opponent was her own. She did feel her face swelling during the fight but it wasn't painful. 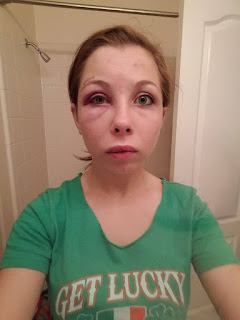 Ok, next day. She has a bit of make-up on but you can see how much her eye has swelled overnight. 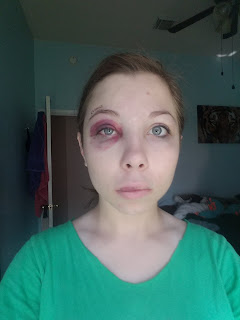 Day two. The swelling has gone down a bit and the bruising has darkened. 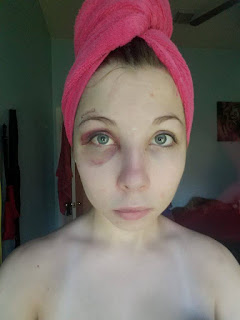 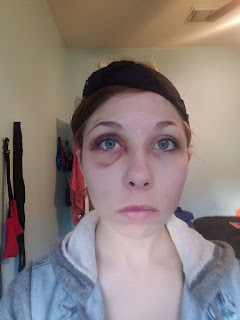 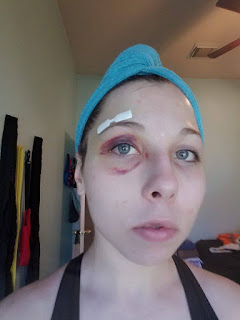 
And here we are at about a week. 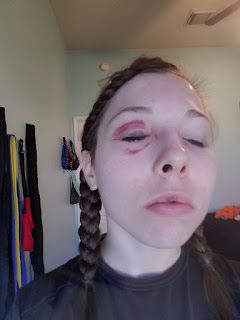 Alrighty, FightWriters, there you go. Hope this gives you some tools to keep in your "details" toolbox. Until the next time at FightWrite.net, get blood on your pages. 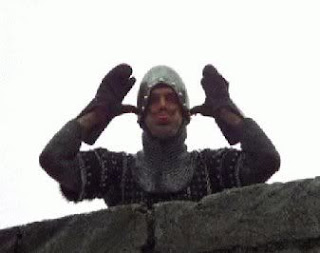 Siege warfare was a Medieval military operation that involved surrounding or blockading a town, fortress or castle in an attempt to capture it. Quite often these places were surrounded by a wall which left the besiegers with two options: go over or go through. Going over was a no brainer. They simply used ladders which were not only easy to set up but to carry to the battlefield as well.

Unfortunately, any time you are close to your enemy you are more vulnerable and the use of the ladder was no exception. The climbing soldiers were easy pickings to not only arrows but one of my favorite weapons, the polearm. Ya gotta appreciate a good ole' long stick!

In order to minimize loss of troops, attacks were also performed at a distance, more often than not with a catapult. These are the weapons we'll be looking at today. There are many but I will highlight the biggies. All of these were used to not only knock down walls but to launch fire, pestilence and of course, in the case of the "cow-tapult", cows, over them. Catapults were employed by not only those outside the wall by those within as well as evidenced by this documentary clip.


Catapult
Any piece of equipment that uses tension, torsion, traction or gravity to launch is technically a catapult. However, this is what we we commonly envision when we encounter the word. All types consist of a bucket, arm and frame. Whatever is launched is called the payload. This particular catapult has an arc trajectory. 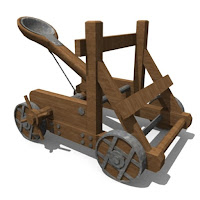 Ballista
The ballista is basically a giant crossbow. Straight trajectory. 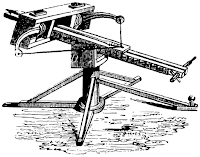 Mangonel
The source of the mangonel's tension is rope wound around the arm and frame. Although able to launch farther, mangonels aren't as accurate as trebuchets. Arc trajectory.

Onager
The onager is often confused with the trebuchet. The difference is their source of propulsion. Like the mangonel, rope is the source of tension. However the onager employs rope twisted at the base of the arm. Arc trajectory. 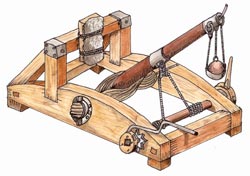 Trebuchet
The trebuchet requires a counterweight. The tension required to make it a catapult is in the pulling down of the bucket and raising of the weight. Arc trajectory. 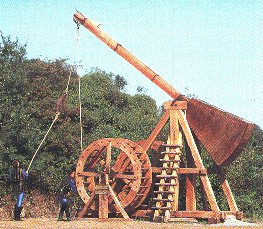 Until the next time at FightWrite.net, get blood on your pages. Now, go away or I shall taunt you a second time!