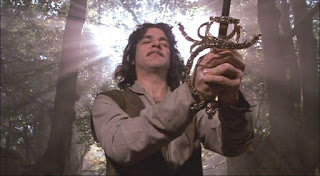 If you are versed in Western/European swords, you will be able to add many more terms to this list. But, these are the basics. I will feature Asian and African sword vocabulary in other posts. 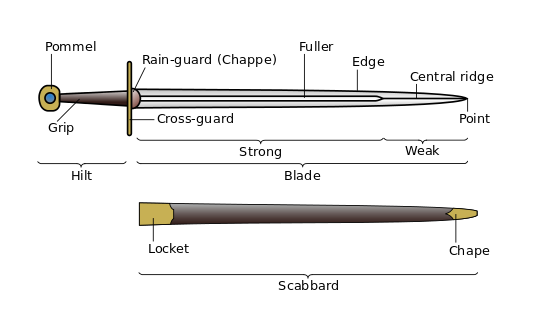 Backsword -- A sword blade, which has a cutting edge only on one side. Most commonly found on curved blades, such as sabers, falchion, and cutlass.
Basket -- An arrangement of steel bars, and panels that form a basket-like cage around the grip (and the wielder's hand). These are most commonly found on Scottish basket-hilted swords, and European rapiers.
Blade -- The section of the sword, which is not part of the hilt.
Cruciform -- A generic term for any sword which when inverted point downward will form the shape of a crucifix.
Edge -- The cutting portion of the sword's blade.
Ferrule -- A metal band at either end of the grip used to secure the leather or wire wraps. Also used as a decoration.
Finger guard -- A small crescent shape bar which extends from the sword's guard, and rises parallel to the sword's ricasso, which enables a user to loop their finger over the guard (which increases point control, but decreases cutting power), without fear of being injured by an opponent's blade sliding down their own.
Fuller -- A groove down the center of a blade, used to both lighten a sword, and conserve sword steel (making a wider blade possible with less material). Often mistakenly called a "Blood Groove."
Full tang -- A sword tang that passes the entire length of the grip, and is attached directly to the sword's pommel.
Grip -- The handle.
Guard -- The section of the sword hilt whose purpose is to protect the wielder's hand. It may take of the shape of a simple bar, a steel basket, a flat disc, or several other forms.
Hilt -- All of a sword, except for the blade proper.
Knuckle guard -- A curved bar which extends from the guard to pommel, designed to prevent the user's hand from being cut by a sliding blow from an opponent's weapon.
Main Guache -- "Left hand." A dagger used in the 16th and 17th centuries, wielded in the left hand and used for parrying assailing swords.
Point -- The tip of the sword's blade.
Pommel -- A counter-weight at the end of a sword's hilt, used to balance the sword. Also may be used as a striking implement.
Quillon(s) -- Renaissance term for the crossguard. Used almost exclusively when referring to rapiers.
Quillon block -- Section of the rapier's hilt where the guard's arms (both bars, and rings) are attached.
Ricasso -- Any narrowing or thickening of a sword's blade, which remains unsharpened, just above the guard. Increases the user's ability to loop a finger over the guard, to increase control of the point.
Tang -- The section of the sword blade that the hilt is attached to. This part of the sword is not visible when the blade is fully mounted.
Welded tang -- A tang where the steel of the blade has had another piece of steel (very often low carbon steel) welded on to it as an extension.
Wheel -- A pommel that is in the shape of a flat disc. It may have added features, such as beveled edges, or raised center sections.
Wire-wrap -- Spun and twisted metal wire, which is wrapped around the sword grip. Often used to increase the ability to grip a sword's handle. Also a sign of wealth, as these grips tended to be more expensive to manufacture.

For a more exhaustive list, go to albion-swords.com. It is a fantastic resource for Western swords.

And now, for those really wanting to delve into Western "swordery," I give you, The Princess Bride...


Until the next round at FightWrite.net, get blood on your pages.

Body Punches - The Cons and the Defense 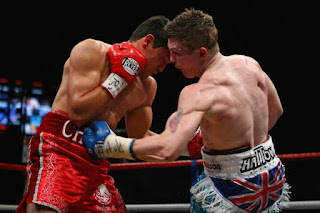 In our last round, I discussed the pros of punches to the body. And, as much as I love them, they have many disadvantages. We'll take a look at those as well as body punch defense.

1. First, with any strike, you leave yourself vulnerable.  This is especially true when you punch the body as you must lower your hands from your face. Doing so leaves the head wide open to attack. With straight punches, the shoulder of the striking hand guards that side of the face. When you punch the body, the best you can do is tuck the chin down to the chest and tilt the head a bit. It's not much of a defense.

2. To drop an opponent, you need to target the liver and that punch requires some prowess. Only a small portion of the liver is exposed from beneath the ribs. And, as most fighters are right-handed, they stand with their liver side back which provides even greater protection. It's a tough shot to land and I would never base my punching game on it or fight strategy around it.

3. Because of the ribs and hip bones, an opponent can take a good bit of beating to the body. The solar plexus is guarded by stomach muscles and an educated fighter will keep that portion of the body tight. Often when fighters punch, you will hear them exhale hard, make a "sss" sound. That gives a little oomph to the punch, but it also tightens the abs which you will want to do any time you strike. If
you make that exhale a habit, you will automatically tighten your stomach every single time you punch or kick. 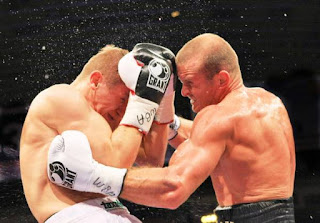 So, if a strike does get through, you will be protected.

Those activated muscles also give added protection to the ribs. Technically, you can break a rib with a punch. But, I wouldn't count on that. Ever. I've seen ribs broken by kicks and knees far more than punches but even those cases aren't common. Also, I've seen folks continue on with broken ribs to the end of the fight.

Now, for the defense. Blocking body shots isn't hard at all. The key is keeping the body tight. But, that's hard to do when you are new to fighting or just plain tired out. When you are exhausted, you will do things you know you shouldn't. A tired body will betray a tireless mind.

Start from a basic standing posture. My post on punches will explain a good fight stance.  From that stance, you just bring the elbow down to the hip bone. If instead you drop the arm, your opponent will capitalize on your mistake. The next combo they throw, they will fake a body punch to get you to drop your hand away from your face then target your jaw.

That's it for this round at FightWrite.net. Until the next round, get blood on your pages.