Happy holidays, fightwriters! On this round of FightWrite we are taking a question from fightwriter, Cindy Emmet Smith. She asks: I have a question for you about the headbutt 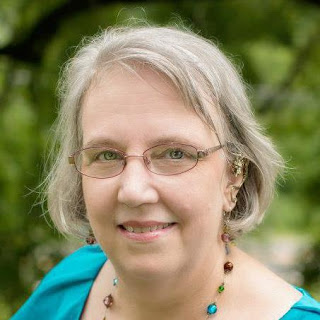 thing. If it is hard enough to hurt the other guy, doesn't it hurt both equally? Unless one is Klingon. I see this in movies and I wonder why one guy is knocked out and the other is fine.

That is a great question, Cindy. Also, deep respect for the Klingon mention.

A headbutt is a legit strike and it is devastating. Anyone who doubts that need look no further than the sport of Lethwei. This Burmese form of bareknuckle fighting allows striking with all the limbs and, yes, headbutting. And, I have to tell ya, a well landed headbutt is tough to watch.

So, why isn't the fighter throwing the headbutt knocked out? Well, for one, he's got a heck of a hard head. Whenever a part of the body is repeatedly roughed, the bones develop calcium deposits making the bones thicker. Also, the Lethwei fighter has proper technique. Yes, there's an actual technique for headbutting. I cover headbutting in my FightWrite book due out in June, 2019 with Writer's Digest. But, I'm gonna cover it now too! 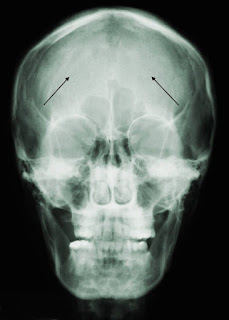 First, find the horns of your forehead. If you draw a line up from the middles of your pupils to the top of your forehead, you'll find two places where the bones are a bit thicker. It will feel like two little knobs. I drew two arrows on the forehead of the x-ray here. You can see by the opaqueness that the bone is a little thicker in these areas. These are the horns of the forehead. You can also use the area between the horns as well as just above it. In my self defense class I teach using the horns. Using these bony knobs allows the striker to keep an eye on their opponent which allows them to aim a little better. Also, if you are trying to use the horns and are a little off with what you use to strike, you will still be striking with a safe area.

In the instructional video you will see the instructor using other parts of the forehead and head which are absolutely correct. You're gonna love that video. Trust me.

Second, find your target. The best places to strike are the nose, eyes and cheeks of your opponent's face. Avoid the mouth as you could end up with teeth stuck in your forehead. My BJJ coach was a soccer goalie in high school. He jumped up to grab the ball just as another player went to head it. The two collided and my coach was knocked out. When he awoke his two front teeth were gone. They weren't lost though! He found them sticking out of the other guy's forehead.

Three, deliver those horns! Despite what you might think, you don't rear your head back. Instead, you use your abdominal muscles which are far stronger than those of the neck. If possible, grab your opponent's shirt and pull them toward you as you strike. Grabbing the shoulders or back of the neck may signal what is coming and your opponent might tense up and brace for the strike. When delivering the strike, your chest, shoulders and neck should move as a single unit.

Here's an instructional video from Master Wong. Oh...this guy...I love him. He's a really low key, shy, quiet fella. I hope one day he comes out of his shell. As he will tell you, if you deliver a headbutt incorrectly, your face will look so ugly, your mom won't even know you!

Done incorrectly, a headbutt can, most likely, knock you out. I say most likely because biologically it makes sense. But all the videos I have seen of people knocking their own selves out with a headbutt are from unsanctioned fights or encounters with punching machines or pumpkins. In all of those cases, I have no idea if the people are drunk or compromised in some way. In the example of my coach being knocked out while he was a goalie, the collision was far more violent than a regular headbutt. So, I can't really use that as a good reference. BUT, can a character in your manuscript headbutt someone and knock himself out? Yes, it's plausible.

There you have it, Cindy. Headbutting 101. Fightwriters, to read Cindy's work, just hop over to Amazon.

In case you need a little inspiration for headbutting in your manuscript, here's two videos for ya. The first is of a goat knocking out a cow with a headbutt. Yes, really. The second is of a goat just headbutting a bunch of people. Y'all, the guy in the striped shirt is a kicking machine! For reals.

Until the next round at FightWrite™.net, get blood on your pages!

Talk to your corner...